Reading a book about the work of someone who has dedicated his life to freeing the innocent is inspiring. When you’re reading that book behind bars, it also evokes melancholy and wishful thinking. No matter where you are when you crack the cover on Bryan Stevenson’s Just Mercy, be prepared to stay put until you’re finished reading it. Be prepared also to have your eyes opened – maybe even welling with tears.

Stevenson, who founded the Equal Justice Initiative, takes readers inside prison walls and courtrooms, introducing us to the human beings sentenced to die by the hands of justice system officials and a public who’ve forgotten to, or refuse to, view them as humans.

Stevenson’s superbly written tome focuses on the exoneration of Walter McMilllian, sentenced to death for a murder he didn’t commit, in spite of the fact that more than a dozen witnesses could testify he was miles away when the murder occurred. Chapter by chapter, we learn Walter’s story, and in between we learn Bryan’s story. His own broken past drives his heroic efforts to bring real justice to his clients and the stories of several others, guilty and innocent, who have been victimized by a justice system which appears to have forgotten its mission to deliver justice, if that ever was its mission.

Similar to Michelle Alexander’s revelations in The New Jim Crow, Stevenson reveals how blacks are disproportionately targeted by the justice system from police shootings (blacks are 21 times more likely to be shot by police than their white counterparts), to the death penalty (in the states of the Old South, you’re 11 times more likely to get the death penalty if the victim is white than if the victim is black, and 22 times more likely to get it if the defendant is black and the victim is white), yet doesn’t bog itself down in statistics. What makes Stevenson’s work so powerful is the deft way he weaves the human stories of those who are the real life recipients of the system’s unfairness. These are not just some shocking percentages or esoteric cultural stereotypes. They are people with faces, feelings, and hopes. Some led promising, productive lives prior to being incarcerated.

I don’t mean to detract from Alexander’s seminal work at all. Her book is vastly important. But what Stevenson has done is extremely important in a personal way. He’s shared intimate stories of those he’s helped to save and those he’s failed to save, in over twenty-five years of his life’s work, defending the innocent and disadvantaged. These are individuals – not collectives. Human beings, not just a labeled group.

Throughout the book, Stevenson seriously questions the entire system from bail to prison to exoneration, showing an extraordinary compassion for clients and opponents alike. In spite of what any reasonable person would consider blatant criminal behavior by police and prosecutors, Stevenson gives those who are clearly oppressing people benefit of doubt that borders on saintly. How he doesn’t explode in rage is a testament to his wisdom and commitment. One  reviewer of his book compares him to Mandela. I think Stevenson’s name stands on its own. His accomplishments don’t stop at tireless work for death row inmates. Arguing before the US Supreme Court, he has managed to ban both death penalty and mandatory life sentences for juveniles. He has also been instrumental in getting states to commemorate lynchings that occurred across the south. That work continues.

The book makes it clear how truly belligerent justice system officials are against all challengers. They literally get away with murder, so why wouldn’t they be?

The main story of McMillian’s exoneration is a powerful one which poses more important questions than it answers. Some might point to it and say, “See! It’s proof that our system works!” I wonder how long such people would be willing to sit on death row in support of their own rhetoric? That an innocent person, obviously and demonstrably so, would have to spend even one month behind bars is proof that our justice system is horribly broken, not “working as it should.” 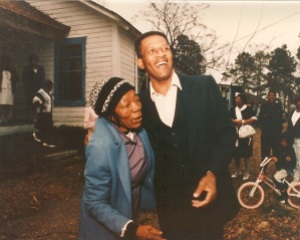 Walter McMillian at his family’s home the day of his release.

Thanks to Stevenson, dozens have been freed from the broken system’s grasp. Thanks to his superb book, readers have an opportunity to see up close how the justice system looks through the eyes of advocates, prosecutors, and convicted. It looks nothing at all like CSI in its myriad of incarcerations.

Just Mercy is a must-read for anyone interested to know how the innocent can be so easily victimized. It’s shockingly easy to convict an innocent person and sentence him to die. So easy that we have currently identified one in every nine sentenced to death were demonstrably innocent. And that’s just the cases involving capital murder charges. How many convicted  of lesser crimes are innocent and still behind bars?

One of the very profound ideas that Stevenson proffers toward the end of the book is that mercy is not something we should reserve for the innocent. It is most powerful when supplied to those who don’t “deserve” it. Mercy is bestowed upon the guilty to legitimize and humanize the dispensers of justice. For if the ones sitting in judgement are incapable of mercy, then they are, ipso facto, incapable of moral judgement. When our justice system can routinely dispense mercy, it might start dispensing justice. Thanks to people like Bryan Stevenson, the innocent have a chance, however slim.

Click here to listen in on Rick’s phone call from prison, after reading Just Mercy.

Click here to see Stevenson’s TEDTalk, which inspired one of the longest and loudest standing ovations in TED’s history, and raised over a million dollars in donations for his organization, EJI.