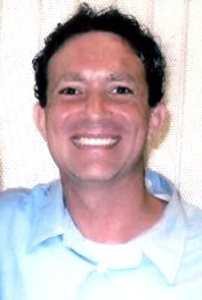 Taj from Virginia, pictured below, with the inspiration for his beautifully touching ode.

She rises before dawn on Sunday
just to catch an early Southbound train.
She makes 800-mile round-trip
just a single day
for a mere three hours together
then says, after the initial squeeze,
‘It’s already worth it.’

She hires a driver from the station
just to avoid getting lost, getting late
pays him to idle the visitation hours
watching Southern asphalt bake in August swamp simmer.

She shirks off thanks
looks deep in my eyes
dusts the backs of my hands
(that she won’t let go)
with tender kisses that seed tomorrows
into my pores.

She comes
simply shows
to visit at Greensville
(mid-70’s-Soviet-chic, turreted hell)
just to co-mingle our talk with presence and affection.

She cares little about frisks,
even less about growling coyotes
posturing in uniforms and scowls
flashing teeth and gnashing bad ‘tudes,
and not one bit about the sharp summer glare
reflecting off surround-sound razor-wire, cuffs, and chains.

She enthusiastically proclaims
over the thrill of posing
just for a standard prison photo op
despite the full senior-prom-phony grins
and my state-issued, elastic-waisted attire.

← Prev: Review of The Other Wes Moore Next: Letters From Prison: Hope is a Scarce Commodity →

Poetry From Prison: In a Moment by Michael Fisher

Stand Still. Each day we must strive to combat the currents we dive beneath, breathing through entropy in which our...