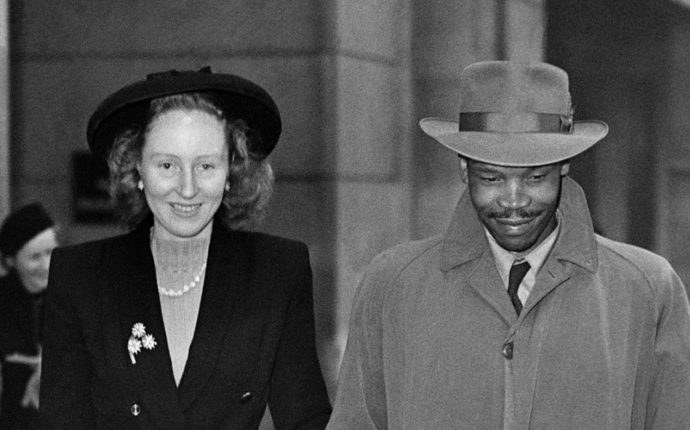 Marriage has always been sacred to God. Unfortunately there have been people in every generation who have their own ideas about marriage. One of these ideas involves purity of race. That people who call themselves lovers of God can sometimes be seduced by these notions is a shame but it has been going on for millenia. Yet God has always considered skin color a non-issue, even when His chosen people got the wrong idea.

Moses  married a black woman and Miriam and Aaron tried to use this against Him. God’s response was to repudiate their racism swiftly and unequivocally.

In prison you see all sorts of tracts by organizations professing to be sources of Godly wisdom. Some of these claim to reveal the truth of “identity,” teaching that white is the race of Christianity, and black and other colors of skin are marks fo inferiority. This brand of religion — it can never be considered Christian — was preached most fervently by the Dutch Reformed Church in South Africa when the policy of apartheid took hold there.

The marriage in 1948 of African heir Seretse Khama to Ruth Williams — a white English middle class woman — threatened such putrescent ideas, preached from pulpits in many parishes.

Two books, A Marriage of Inconvenience by Michael Dutfield, and Colour Bar by Susan Williams, tell the story of their marriage and the shocking efforts that several governments took in an attempt to destroy it.

Ruth and Seretse’s triumph is to my mind a testament to God and to marriage itself. Marriage as an institution proved in their case to be stronger than several governments, including the once-greatest empire the world had ever known. Of course it required a near super-human commitment by today’s standards, but the notion that love conquers all is no better demonstrated than in their union.

I also think their triumph speaks to the power of Christ’s utterance in the Gospel of Mark, a promise of sorts which should give great comfort to couples who face outside agitation to their relationships.

Therefore what God has joined together, let not man separate. — Mark 10:9

To start with, at the behest of the regent of Bechuanaland, Seretse Khama’s home country (now Botswana), and officials in South Africa, British statesman attempted to personally interfere in the wedding, going so far as an effort to disrupt the very ceremony itself. When that failed, the British government came down on the couple with all of its authority. It finally, with the approval of the celebrated Winston Churchill, exiled Seretse from his own country.

Both books recall these events in great detail, in some cases highlighting the same statements of government officials. Dutfield’s book, published in 1990, ends his narrative earlier in the couple’s history. Williams gives us more of a detailed view of the couple’s life after exile and the events that led to Seretse’s election as Botswana’s first prime minister.

Two things stand out and result in great hope. One, the time and expense that the British empire spent trying to destroy a puny little marriage by comparison to the might and power of their institutions. Even when Seretse’s own tribe lovingly embraced Ruth as their “Queen mother” and worldwide moral outrage threatened the careers of top politicians, they persisted in their unholy attack. Two, even Winston Churchill, a man who had overseen ultimate victory over the nazis, couldn’t manage to prevail over Ruth and Seretse.

The British government was seeking to appease South Africa and perhaps even the U.S., which eyed South Africa’s phosphorous deposits, rich in yellowcake (the name given to uranium oxide), with relish. To governments, power and glory is to be bestowed by men. This story is a great testimony that the praise of men contains no real value.

Neither author is a McPhee or McCullough (do you need a “Mc” in your name to get the Pulitzer?), but both treat their subject with great respect and care. Both should be required reading in our high schools, and recommended to anyone who thinks that the institution of marriage can be threatened by any outside force.

Both books relate different events which appear to confirm that God’s hand was over their marriage. In Dutfield’s book, he tells a beautiful story of Ruth and Seretse’s reunification the day their first child is born.

Williams shows us the improbable rains which fall at times that only the most jaundiced reader would misinterpret as coincidence. I leave readers to discover these miracles for themselves. The word “pula” in Setswana means rain, a scarce and extremely valuable commodity in landlocked Botswana, and as such is also a shout of blesssing. Pula to all of you.

This short Seretse Khama documentary features an interview with Ruth’s sister, Muriel Williams, who talks about how Ruth and Seretse met and the difficulties they endured because of their interracial relationship.