Q: What is your sentence?
A: Life without parole.

Q: Do you feel your time in prison has benefited you?
A: Sure, I was out of control, I was unable to function as a part of society. I came to prison and lost my freedom, but found myself. I am free on the inside, the fact that I am in prison means relatively little. I enjoy life, I just live in here now.

Q: Have you made friends on the inside that you will keep after you or they have been released?
A: I am not getting released, and although I’ve had many friends who have gotten out, none have kept in touch more than a letter or two.

Q: Do you have a job? If so, what is it? Wage?
A: Yes. Houseman. Wage = $0. Inmates in Florida do not get paid for working like in  most other states.

I make these friendship bracelets. They tie on and unite easily. The nice, even uniform side goes up. Let me know if you would like more.

Thank you so very much. I am interested to see what happens now.

Letters From Prison: A Hard Life 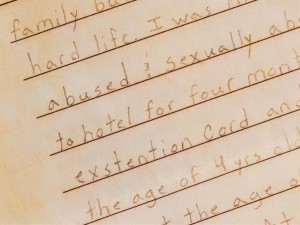 I am 33 years old. I have no family but a brother who is also in prison. I have really had a hard life. I was kidnapped from my grandma by my mom, physically and sexually abused, forced to live and stay in closets, from hotel to hotel, for four months. I was tied down to a car seat with an extension cord and left on a doorstep of a group home, all at the age of four years old. I was in many different placements as a child.

At the age of 18 I was kicked out of state custody with no after-care, and was found to be SMI (seriously mentally ill). At 18 1/2 years old, I was sent to prison for $500 of forgery and given four and a half years, plus two years in county jail. I did not get out of prison until age 25. I had no family, and no place to go. Seven months later I was attacked by a man and defended myself, and ended up going to prison for four more years. I got out at 29 years old, was found to be mentally disabled and put on disability. At the age of 32, I was stopped by the Gang Unit because I have a lot of tattoos. I was walking down Broadway Road and they wanted me to strip down to my boxers on the main road to take pictures of my tattoos. I said no. They got mad – four of them jumped me, and then took me to jail. I mentally broke down, slipped out of my handcuffs and hit one of the four officers two times with my hand, and for that I got 28 years flat. I don’t have anyone.